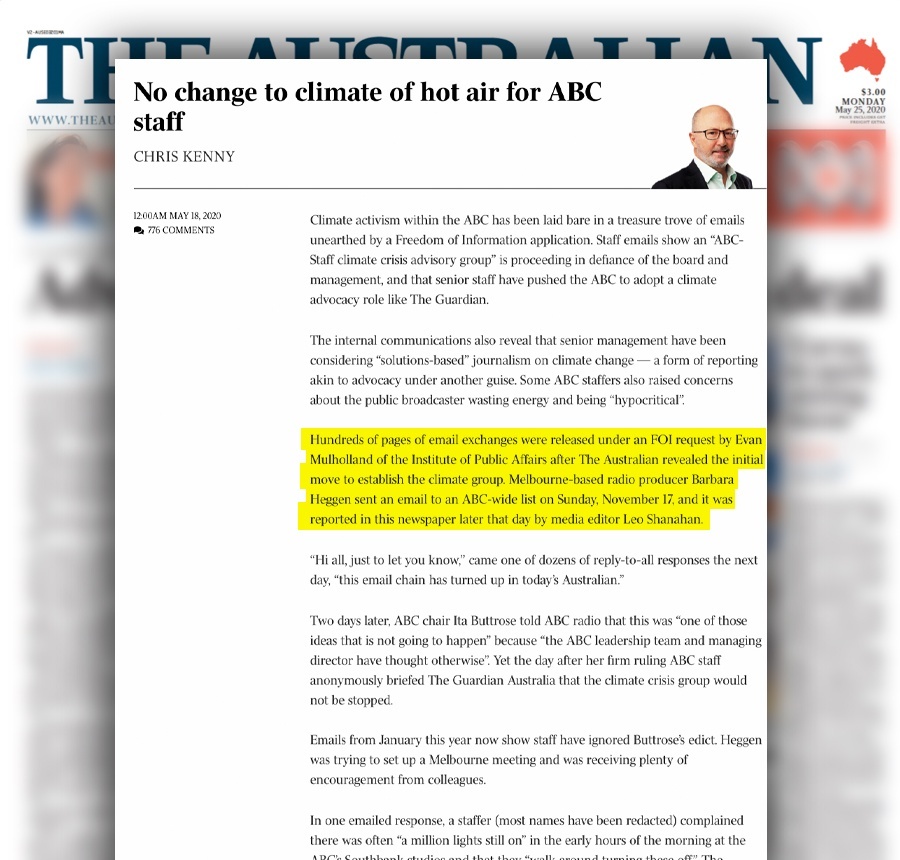 If there are concerns with the quality of journalism in Australia perhaps the AMCA could start by investigating the ABC given that less than one-third of Australians believe the ABC represents the views of ordinary Australians, according to polling we commissioned in February . But, of course, the ABC is not included within the ACMA’s inquiry on impartiality and conflicts of interest in news broadcasting.

But while the ABC can escape regulatory scrutiny in a way that media outlets like Sky News or 2GB – and commentators like Andrew Bolt and Alan Jones – cannot, the ABC most certainly cannot escape being held to account by the IPA.

As part of the IPA’s Transparency in Government program (and I class the ABC as a part of government because they are wholly funded by taxpayers), Evan Mulholland undertook a series of Freedom of Information requests to understand how the political views of the ABC staff were compromising their ability to deliver fair and accurate reporting. Evan’s analysis was featured by Associate Editor Chris Kenny in The Australian (the article already has close to 800 comments).

Political bias at the ABC is, of course, not a new issue. For example, in 2018 IPA Adjunct Fellow Professor Sinclair Davison was interviewed for The Outsiders program on Sky News and reported an analysis which showed ABC staff were 5 times more likely to vote for the Greens than the average Australian. This was later confirmed by the ABC’s own factcheck website which confirmed 41.2 per cent of those who responded to a survey published in the Australian Journalism Review would vote for the Greens (this compares to a bit over eight per cent for the whole of Australia).

But Evan’s analysis is so important because it provides an unfiltered insight into how senior ABC staff are deliberately distorting their coverage of climate change to achieve political and ideological goals. Specifically, Evan sought to understand the motives behind the ABC staff initiated “Climate Crisis Advisory Group.”

Back in November last year Melbourne-based Executive Producer Barbara Heggen sent an email to an ABC-wide list to gauge interest in setting up a “Climate Crisis Advisory Group.” After the initiative was reported in The Australian, ABC Chair Ita Buttrose said the advisory group was “one of those ideas that is not going to happen” because “the ABC leadership team and managing director have thought otherwise”.

However, Evan’s Freedom of Information request shows that ABC staff continued to openly defy Buttrose’s directive, with meetings of the Climate Crisis Advisory Group planned as recently as January this year.

In emails that Evan uncovered, the ABC News Director Craig McMurtrie suggests that there was legitimate debate between staff that the ABC would follow The Guardian model of journalism, which even the ABC admit “tends towards more advocacy journalism”.

“The fact that the ABC would even consider following an activist form of journalism would not only be a breach of their charter, but proves how completely out of touch ABC staff are.

The responses from ABC staff and endorsement of a biased form of reporting prove that they are completely at odds with mainstream Australians.”

The internal communications also reveal that senior management have been considering “solutions-based” journalism on climate change — a form of reporting akin to advocacy under another guise.

It is revealing how widespread the climate activism is within the ABC.

One respondent to Barbara’s email said (I can’t tell you their names or position because that information was redacted from the FOIs – which I can’t really understand because if they are all paid by the taxpayer then it is our information and we deserve to know):

“Hi – great idea. There is a bit of thought going on around this elsewhere as others have said but that’s no reason to not have a group like this too. I’m all for it and keen to take part.”

Another said: “Lots underway on a similar front right now I gather (re: broader strategies etc)”.

And a third said:

“Great idea Barbara…yes we’ve done Ed pols [editorial policies] in the past and that aspect needs constant reminders that we must report established science, the evidence, and not myth…”

I wonder if by “the evidence, and not myth” the ABC staffer was referring to analysis prepared by IPA Adjunct Fellow Jennifer Marohasy earlier this year which found that the Bureau of Meteorology had been cooling previous temperature records such that current temperatures appear hotter than they really are? Somehow, I guess not.

Evan summarised the situation very nicely when he said:

“These FOI documents highlight that it is well and truly time for a serious and sober debate post-coronavirus on privatising the ABC. If ABC staff want to run a biased broadcaster, then Australian taxpayers shouldn’t be forced to fund it.”