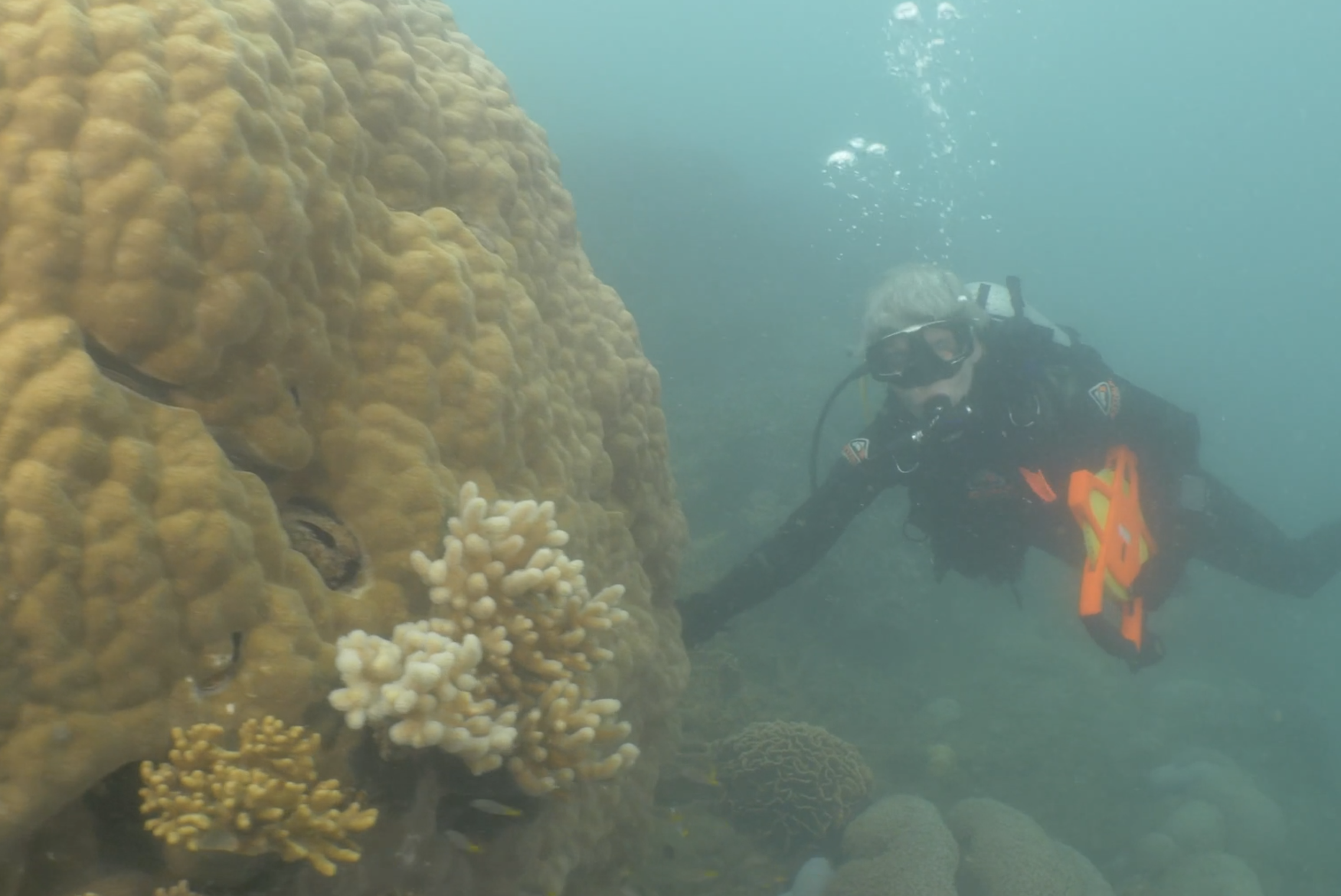 Late last year, I went on an expedition in search of a type of very old coral known as massive Porites. Stuart, Shaun and I dived five very different coral reefs between Cairns and Townsville.

The first was an inshore fringing coral reef to the leeward side of High Island. High Island is close to the Australian mainland, and not far from the Russell and Mulgrave rivers that drain a catchment with sugarcane farms. More than almost any other coral reef along the Queensland coast, this inshore reef would likely show impacts from agriculture – if there are any.

This coral reef has a very broad and long reef crest. On the afternoon of 28th September, when we visited, this habitat was covered in perhaps one metre of water. Along the seaward edge of this fringing coral reef, the crest gives way to the reef slope where we found so many massive Porites – so many of the old corals that we were searching for.

The water was quite turbid, which is common at these inshore reefs depending on the prevailing wind.

On the reef slope, many of the Porites (these massive bolder corals), were more than 2 metres in height and width, and a golden colour. There were lots of little fish. I found a peg that perhaps marked a Porites that been cored more than 17 years ago. The Australian Institute of Marine Sciences (AIMS) once cored corals at this reef.

Once upon a time, the scientists drilled into the corals and extracted a core from which they created a slither. Then, under x-ray, they counted the annual bands with the varying lengths and thicknesses of each band being a measure of annual growth rates. Yes, these massive bolder corals have annual growth rings – like tree rings.

Then we found another peg, perhaps marking another of the corals that used to be cored. But our job was not to count the pegs, rather to measure the height and width of the Porites – of the old corals.

The massive Porites at the beginning of the reef slope were of a uniform height. This is because their vertical growth is constrained by sea level. The growth rates of coral colonies slows as they come within 2- 3 metres of the surface. So, the annual growth bands of these Porites, at this reef, may not be a good indicator of climate change, because they are so constrained by sea level.

Our expedition was in searching for Porites, but not any Porites: Porites suitable for coring to determine the effect of climate change on coral growth rates.

At any given location, the sea level changes with the tides. Sea level, the tides, can vary by 3 metres in one day at this reef. And the very lowest tide in the 18.6-year lunar (moon) declination cycle may cause a tide that is a foot (30cm) lower than the lowest tide in an average year. (There is more about this in our new book ‘Climate Change: The Facts 2020’, see page 267, and there is also a Factsheet about tides falling on corresponding El Nino events at the book’s dedicated webpage, see figure 4 at the second link.)

The tides, and so much else that happens at coral reefs, has a lunar/moon influence – both the good and the bad. Coral spawning happens exactly 5 days after a full moon, and the worst coral bleaching events, which were in 1998 and then again in 2016, correspond exactly with the lunar (moon) declination cycle of 18.6 years. If the massive Porites at the coral reef fringing High Island were not constrained by sea level, they would be more dome shaped. But as they grow closer to the surface, their tops are bleached on the lowest tides and then die, so they become flat topped.

As the reef crest grows seaward and the coral colonies now growing on the slopes are incorporated into it, these massive Porites may eventually grow into a donut-like form referred to as a microatolls. A microatoll has dead coral in the centre and is surrounded by a ring of live coral.

There are so many ‘donuts’ – Porites microatolls with diameters of perhaps two metres – in the aerial photographs from above the reef crest at High Island. These corals may have become incorporated into the reef crest as the coral reef prograded seaward and so may also be two metres in depth, or the coral colonies/the Porites microatolls may be quite flat bottomed, having started life on-top of the existing reef platform and only ever had the opportunity to grow laterally because they have always been constrained by sea-level.

From 120 altitude above the reef crest at High Island, and indeed above most reef crests, it mostly all looks rather drab and desolate – except for the donuts. It is from about this altitude that the chief scientist at the ARC Centre for Coral Reef Studies at James Cook University has decided that more than 50% of the Great Barrier Reef is bleached. His reports make newspaper headlands around the world, and so most people now believe that the Great Barrier Reef is half dead.

To be clear, Professor Terry Hughes flies over hundreds of reef crests, looks out the plane window, and scores them. If more than 60% of the corals looks dead to him the reef is given a score of 4. (This method, and the technical paper, are referenced at the end of this article.)

Except that at this altitude, at which the plane flies, it is actually impossible to see any individual corals – beyond the large donuts, which are Porites microatolls.

While it is impossible to see the littler corals and the colourful fish at this high altitude – from such a distance – there were so many delicate and pretty corals on this reef crest, and even pretty blue fish as you can see in the transect photographs. (There is a new webpage with the photographic transects and a bit more. It will become the data page for High Island reef eventually, hopefully, incorporating species lists and analysis of coral cover and coral health.)

The chief scientist claims to ground-truthed his scores from the aerial flyovers by laying belt transect that are ten metres in length over some of the reef crest. We laid such transects at the High Island reef crest on 28th November 2020. We also laid transects at 5 metres depth. We are planning to go back and lay transects at 10 metres depth.

Just considering the first 10 metre transect from the reef crest at High Island: at 2 metres along, I can see such a pretty beige Lobophytum pauciforum coral. The tentacles are extended along several of the branches. So, I can conclude this is a healthy coral.

But what about the coral at 5 metres along this photographic transect? It looks bleached! But perhaps this is actually a soft coral, perhaps Sinularia polydactyla which is a type of coral that never has any zooxanthellae, so it can’t bleach.

But the last photograph in this transect, at 10 metres: the corals are almost all dead and covered in algae. There are, though, two young nobly Porites emerging from the destruction that could become microatolls eventually. After a hundred years these two pink nobly things could grow to a metre in diameter and be donut shaped.

While taking the transect photographs at this reef crest Shaun found and also photographed a blue lionfish, Pterois sp..

While Shaun took the photographs, Stuart took video of the corals along the tape measure, along the transects. This video transect gives a more continuous and a wider-angle view of the corals along each of the ten metres sections of reef. Considering just the last three of the ten-metre sections of video transect which are from the reef crest, how would you score this reef crest?

Given the great variability in coral cover, and coral health, and the diversity of coral species and just along 10 metres of transect, I find it quite difficult to make such a judgement.

Science is not a truth. It is a way of getting to the truth.

If we use the method applied by the chief scientist then we have to choose from just one of five categories for this reef. According to his method, the result of which are regularly reported across the world, you need to choose one of the following categories:
<1% dead, 1-10% dead, 10-30% dead, 30-60% dead, >60%.

Perhaps it would be easier if you just looked at the reef crest from 120 metres altitude and made a decision based on your impression of the corals from this altitude, as the chief scientist does.

So, what is your decision? From this altitude could it be concluded that this reef crest is more than >60% dead? Would this be a fair assessment, and would it then be fair to conclude that the entire ecosystem at this fringing coral reef is more than 60% dead?

I actually think that there are major problems with the methodology used by Professor Hughes to decide on the state of our coral reefs. I think it inappropriate to attempt to categorise the state of corals from such a high altitude, from more than 100 metres away. I think that the professor should be getting in, and under, the water.

If there is anything that a high altitude aerial photograph is useful for, beyond finding Porites microattols at reef crests, it is perhaps distinguishing the different habitat types at coral reefs. From high up in the air above High Island it is easy enough to see that the reef crest is quite different from the reef slope.

Methods: We compiled an attribute table of coral bleaching scores for 1156 whole reefs on the Great Barrier in 2016. The attribute table identifies each reef by a unique identifier number and (where available) reef name, the longitude and latitude of the centroid of each reef, a categorical bleaching score of the bleaching status of each reef, and the date the reef was surveyed from the air.
These data were generated from comprehensive aerial surveys of the Great Barrier Reef Marine Park and Torres Strait (Fig. 1) conducted on ten days between 22nd March 2016 and 17th April 2016 when bleaching was at its zenith, but before significant mortality had set in (confirmed by extensive underwater surveys at 260 sites (104 reefs).

Underwater surveys of the coral bleaching were conducted at the same time on 104 reefs, to assess the accuracy of aerial surveys, using five 10 x 1 m belt transects placed on the reef crest at a depth of 2m at each site. Observers identified and counted each coral colonies and recorded a 6-scale categorical bleaching score for each one: (1) no bleaching, (2) pale, (3) 1-50% bleached, (4) 51- 99% bleached, (5) 100% bleached, (6) bleached and recently dead. The amount of bleaching for each location is the sum of categories 2-6, i.e. excluding unbleached colonies.

There is a High Island data page, with the transect photographs and I’m hoping to add species lists and more to this page: https://jennifermarohasy.com/coralreefs/high-island/

Part 1 of this series concerns Pixie Reef, just to the north of Cairns, and can be found here: https://jennifermarohasy.com/2020/11/measuring-old-corals-coral-reefs-part-1/ . Like High Island, Pixie is so close to Cairns but such a different reef perhaps in part because it is not fringing a continental island.

This website is archived each year by the Australian National Library:
https://webarchive.nla.gov.au/tep/66941